Under the entries for CHENTH (Kent) in the Domesday book of 1086 is one for BRUNFELLE (Broomfield) and Broomfield was recognised as a place with enough identity to warrant an entry in its own name, although closely associated with Leeds.

The name Brunfelle has changed through the centuries.  Most references show the spelling as Bromfield with an occasional Bromefield. The abundance of heath and broom growing in the area, at one time was thought by some to be the origin of Broom-field and Broom still grows in the woodland today.

Broomfield has several ancient buildings of note including 2 early Tudor hall-houses that face West, a gabbled Barn built in 1740 and now converted into two dwellings and an Oast House built about 1840

Records of Broomfield, apart from the church register, are sketchy and rare.  There have been, however, three families of note with some recorded information. The Hatch family, one-time occupants of Rose Farm, were famous bell makers from 1600 to 1663. Records show that some 155 bells were cast by them in Ulcombe and Kingswood, including "Bell Harry", after which the central tower of Canterbury Cathedral is named.  As is one of the bells in St Margaret's, Broomfield.

The once famous Kent cricketer, Frederick Hollands, was born in the parish in 1822 and played for Kent between 1849 and 1859. In addition, a George Bodbridge from Broomfield was a protestant burned as a martyr in 1555 at Canterbury.

Up to very recent times, Broomfield was an agricultural community with, it seems, quite a stable population.

The Church of Saint Margaret’s is in Broomfield.  Traditionally this small Parish Church was used by owners and residents of nearby Leeds Castle. It was named for Saint Margaret of Antioch and largely built in the 1100s. It has Norman nave walls and was largely restored in 1879. The church also has fine stained glass. The church has probably been a place of worship for more than 2000 years and the church yard has many ancient yew trees.

Opposite Broomfield Village Green and facing east, there is an eighteenth century set of three dwellings called Barrack Cottages.  These were built to house military staff during the Napoleonic wars.

Broomfield also has an Ancient village well situated at the roadside on the Village Green at Broomfield. The well is fed by spring water on the north-facing hills of the River Len valley. 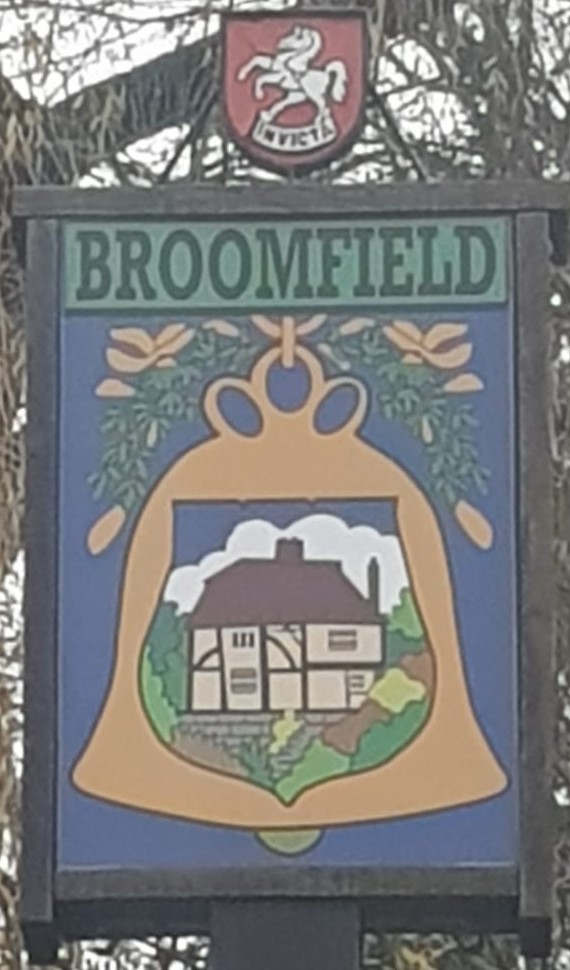 Kingswood was originally a community of small holdings producing mainly pigs, turkeys, eggs, soft fruit and other market produce.  These came into being with the demise of the East Sutton Estate in 1918, and the selling off their woodlands in 5 acre lots in the South West of the parish along Gravelly Bottom and Pitt Roads.

In around 1938, a few like-minded people in the parish erected a wooden building on land given by Mr. Apps, to serve as a village hall. This small wooden construction, under an asbestos roof served the community well. Sited off Gravelly Bottom Road, on land in front of what is now Rowan House, it was the heart of the then village.  A venue for parish meetings, whist-drives, dances and even a library. During the war it was invaluable to the community to coordinate their war efforts. A now faded certificate hangs in the new village hall from these times. It commemorates the adoption of HMS Maidstone during warship week, March 1942.

The war, in and from the air, affected the lives of Broomfield and Kingswood people. Some of the battle of Britain and other actions were fought above Broomfield with both the German and British aircraft coming down within the parish.

In Kingswood Flying Officer Peter Pease lost his life in September 1940 when his Spitfire Marked XT-B, crashed in the field behind the new village hall.  At the junction of Broomfield Road, Duck Pond  Lane and Gravelly Bottom Road there is a memorial to him and a small tree was planted at the spot in the field where his plane crashed. A new affordable-homes development at the end of Ashford Road in Kingswood has now been named Peter Pease Close.

In the field above the church in Broomfield, a Dornier 17z Bomber just missed the treetops to plough into the field with a mighty explosion. The remains of the crew were buried in the churchyard initially but later re-interred in a major German cemetery in this country. For some reason, only the pilot, Martin Ziems, was interred at the Maidstone cemetery and is still there today.

There were several other incidents of aircraft, and later, V1's (doodlebugs) crashing into the parish. Local people served in the forces and a local home guard platoon was raised in the area. Troops came into the village to run ack-ack guns and search lights, while New Zealand and Canadian troops exercised in Kingswood.

After the 1939-45 war, laws were enacted requiring planning permission for all buildings. As materials became available, permission could be obtained for development along the mud tracks (now known as Whitehall Drive and Charlesford Avenue). Parcels of land were sold mainly to small developers and gradually the tracks in Kingswood became the framework for the roads we have today. Apparently, a Mr Charles Ford, who lived in Ashford and worked in Whitehall owned some of the land.

With the new developments came new services, electricity with mains water arriving in 1948. Before this, water was hard to come by; few wells were found, the small holders using dew ponds, collecting the run-off from roofs or brought in by tankers. It was not until 1975 that mains drainage came to Kingswood.  Shortly after this time, most of the unmade roads were improved at the expense of the residents. Thereafter, the roads were put in with the buildings.

The only public amenity, the wooden hall in Gravelly Bottom Road was found to be inadequate for the now growing population.  It was therefore decided by the Village Hall Committee, who had always run the old hall from letting monies, that in order to promote the idea and raise the necessary funds to build a new village hall, the size of the village hall committee should be increased. During the next ten years, the enlarged committee organised fund-raising events within the village. Disco's, Fete's, Old Time Music Halls, Pantomimes, Auctions, Jumble Sales, Sedan Chair Races, Pantomime Horse Races, sponsored walks and a sponsored knit-in were among the many events.

Some of these events were held on "Millie's" field, owned by Millie and Edgar Thorneycroft; this land is now known as Thorneycroft Close. The Kingswood and Broomfield News was started to inform and maintain the ongoing efforts of fund raising.  A very successful lottery was also operated which raise considerable funds over a long period.

In April 1980 the new hall was opened, much closer to the main group of houses. This new hall was substantially brick built with all the facilities unheard of in the old hall.  A kitchen, small function room, large main hall for badminton and a good size stage, plus an effective heating system. Even a proper car park!   Another benefit, not realized at the time, was the community spirt engendered by the joint effort to raise the funds. In May 1981 Kent Enterprises awarded, in a competition, a certificate of commendation in acknowledgement of their achievement.

The influx of new homes and young families brought the need for a primary school within the village. Before this, the children went by bus to Ulcombe or travelled to Leeds. In 1975 a primary school was built and opened. The Kingswood and Broomfield News reads "Kingswood Primary School is near completion and the Headmaster Mr. Fox has been appointed". It has been said that a village requires a church, a pub, a post office and a school, so the opening of the latter completed the quartet. However, by the end of the century we were again incomplete, with the loss of the "Battle of Britain" pub, closed in 1997 and now demolished.

During 1987 the parish was visited by two ladies from a city in the Unites States called Broomfield, just north of Denver, Colorado. These ladies had travelled to England to find their namesake and propose a sister city in the United Kingdom. A proclamation promoting friendship and communication between the 'Broomfields' hangs in St Margaret's Church.

Kingswood and Broomfield by the end of the 20th century has grown into a new village within an ancient parish. Perhaps, the “old and new” contributes to the well-being of this community. 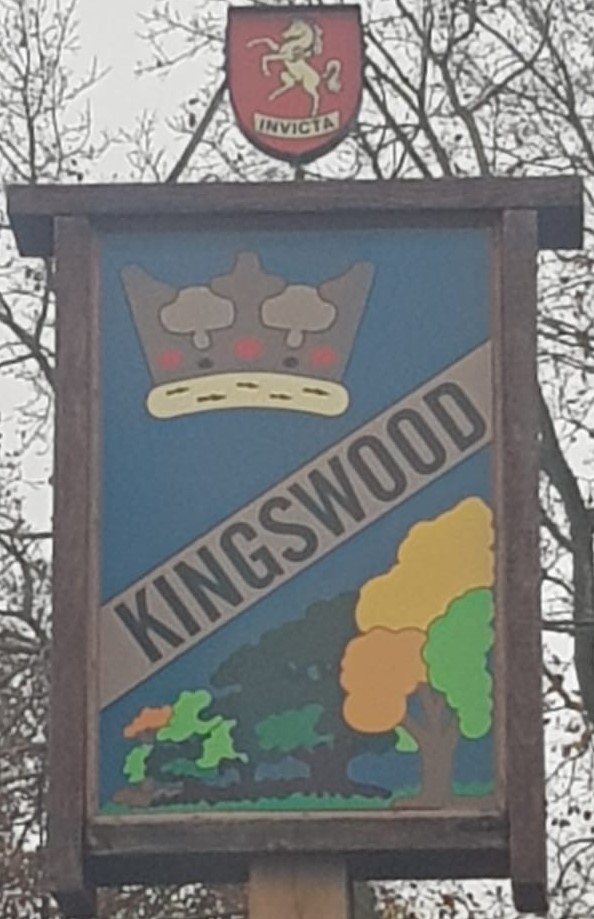